Today was a day of firsts … first time attending the CBSI-UK Leaders Conference, first time flying into Manchester International Airport, and first time riding on the English rail system. It was also a day of lasts (at least as far as we can anticipate) … the last time staying with Sean and Marie in their self-catering apartment (at least 8 years now), the last time renting a car from our agent Joe (at least for more than a day), and the last time to leave Ireland after just a few weeks.

The flight to England was short and uneventful … starting our descent shortly after leveling off. We had a decent bit of walking at the Manchester to get to the train station, intensified by having to carry with us two large suitcases and two carry-ons. We had to catch one train for a short trip to the main station to catch another for the longer trip to the town nearest the conference. We had time to get lunch at the main station. It was interesting and a challenge to find a place for our bags on the trains as they are not really set up for that. The first one was not too bad as they had an area where we boarded that we could leave them, probably because it was leaving from the airport. The other did not have such a provision and we had to leave the bigger ones on the smaller landing where we boarded and try to place them where they would be out of the way. 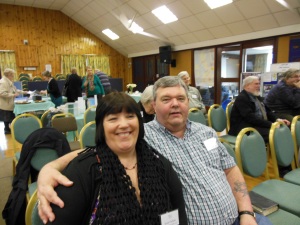 We arrived at the conference center while the conference staff were still setting up to receive people, so we had plenty of time to rest some and fellowship before dinner. Our friends Sammy & Joan from Northern Ireland were there already so we got to visit with them and unpack before the crowds were arriving.

It is a beautiful location for a conference as you can see in the picture below and the facilities were quite nice. We met many wonderful people as well as connected with several other people we already knew.

The keynote speaker for the conference challenged us throughout the weekend with messages from the book of Psalms and there was much time given to prayer and worship also, as well as leadership training.

This is a picture of the main building of the conference center, but where most of our group stayed was behind the camera about the same distance away.